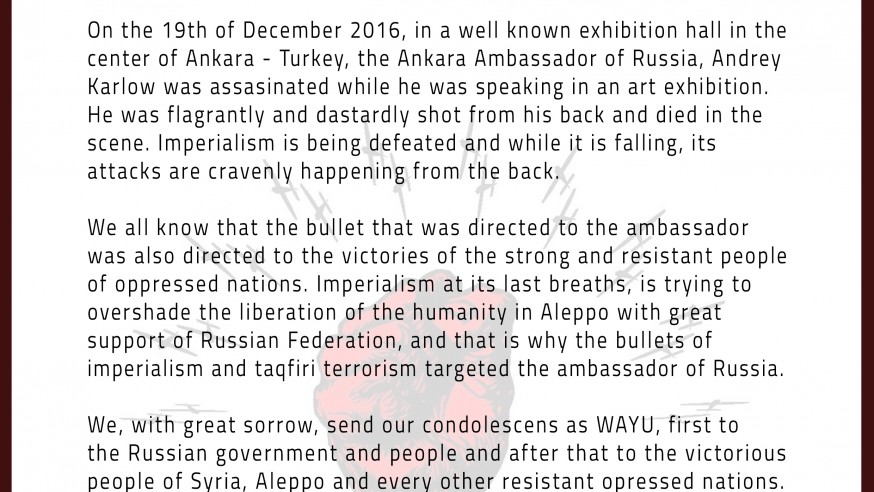 Condolence Message of WAYU on the Assassination of the Russian Ambassador

On the 19th of December 2016, in a well known exhibition hall in the center of Ankara – Turkey, the Ankara Ambassador of Russia, Andrey Karlow was assasinated while he was speaking in an art exhibition. He was flagrantly and dastardly shot from his back and died in the scene. Imperialism is being defeated and while it is falling, its attacks are cravenly happening from the back.
We all know that the bullet that was directed to the ambassador was also directed to the victories of the strong and resistant people of oppressed nations. Imperialism at its last breaths, is trying to overshade the liberation of the humanity in Aleppo with great support of Russian Federation, and that is why the bullets of imperialism and taqfiri terrorism targeted the ambassador of Russia.
We, with great sorrow, send our condolescens as WAYU, first to the Russian government and people and after that to the victorious people of Syria, Aleppo and every other resistant opressed nations. This bullet cannot make us give up from our fight of freedom and liberation. The strong and free people of the West Asia will keep depending on each other and stand right besides Russia.
Executive Committee of WAYU
Previous PostStatement by WAYU on the Inhuman Terrorist Attack in İstanbul, Beşiktaş;
Next PostWe Stand with Bangladeshi Youth 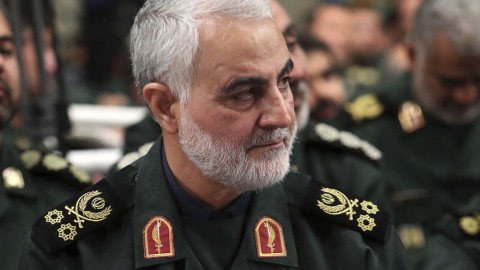 Qassem Soleimani is the Martyr of the Oppressed World

The 3rd of January at the Baghdad International Airport, an American drone killed 8 people by launching missiles and among …

Yesterday, a US-backed faction within Bolivian army, has staged a coup against the Bolivian President Evo Morales Ayma who is …

Time To Stand In Solidarity With President Maduro

We, as World Anti-Imperialist Youth Union (WAYU), condemn the unlawful and illegitimate proclamation of Juan Guadio as the president of …

The U.S. Sanctions on Iran are Null and Void

Today, the 4th November, is the anniversary of a great event in the history of world anti-imperialist struggle: The seizure … 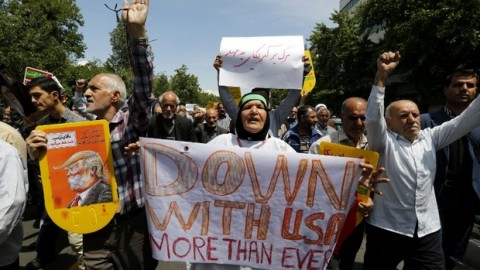 WAYU Statement on The US-Backed Terrorist Attack to Iran