Statement by WAYU on the U.S.’s Attack to Syria

Yesterday, U.S. naval forces hit Syrian airbase in Homs with missile strike as a response to alleged chemical weapon use of Assad government to civilians. As a consequence, six military personnel passed away. Fortunately, much more causality is precluded. This is, in many respects, a clear instance of imperialist act. We, as the youth of anti-imperialist world, strongly condemn this aggression and stand with Syrian government and people.

First, “chemical weapon use” is a notorious lie proven nothing but to serve the justification of imperialist invasions. The unforgettable case for the world is Iraqi War. U.S. military forces caused more than one million people’s death after the invasion in 2003. They used the same pretext with the recent missile attack. The old and bloody scenario is at the stage once again.

United Nations inspectors investigated a chemical weapon use incidence in Ghouta in 2013 and reported that it was the opposition not Assad government who committed to this war crime. One year later, the detected chemical weapons were cleared with the cooperation of Syrian government under the supervision of U.S. and Russian Federation along with UN.

Second, this act is against the international laws. Any attack to the territory under the control of a sovereign state has to be confirmed in the United Nations Security Council. However, the U.S. officials and the European Union leaders ignored Russia’s offer in the Council to conduct a careful investigation and suspend judgment until the official results have announced. Considering the UN report in 2013, this is no but warmongering.

Third, this aggression is even against the U.S.’s own laws. According to American laws, for the military actions not directly related to American presence abroad, the U.S. congress has to be informed in advance. This is a democratic principle on which the United States have founded. Yet, for imperialist actions, the U.S. governments don’t even hesitate to violate its own values. North American people should resist to this unlawful and anti-democratic action.

Besides its unlawfulness, the purpose of this aggression is clear. They failed in Syria. They failed in the so-called Kurdish Corridor. Their long-enduring influence in West Asia was getting rapidly replaced with regional initiative embodied in Moscow Agreement. In the face of this balance shift, “the military-industrial complex” of the U.S. took again the strips of the war machine and suppressed the promises of Trump administration not to involve in war.

This is a lost cause, however. The international economic system under the U.S. flagship is being shaken right now. The European enthusiasts for the U.S. intervention are troubling with their own problems. Despite the vicissitudes on cooperation between regional governments, all the resistant nations of the region know that there is no life without independence. There is also no independence without regional cooperation and international solidarity. That this will become reality sooner or later is as clear as the sun will rise and set. No action can change the fact that the sun of the Atlantic system is setting and the sun of anti-imperialist world is rising. 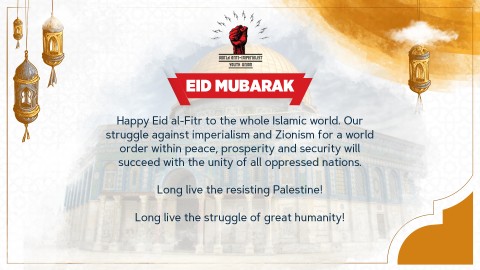 Happy Eid al-Fitr to the whole Islamic world. Our struggle against imperialism and Zionism for a world order within peace, …

FREE JERUSALEM, INDEPENDENT PALESTINE! LET’S UNITE TO DEFEAT THE ZIONISM! The occupation forces of the Zionist state of Israel have …

The American Dream Is Over

The date of 6th January is a milestone that demonstrates the debacle of the imperialist world. In front of the …

The Greatest Agrarian Uprising in History: The Farmer Protests In India

In the second online event of the year, WAYU met with Prof. Atul Sood and Navkiran Natt to understand the …